I'm workin' on a game. I need a place to host images. For now, this is it.
They're likely in chronological order, and maybe I'll start explainin' 'em a little too.

The weapons system is surprisingly flexible. I have a ton of capabilities, but most of the time I just test with a simple laser.
In this one a friend made a bit of a fireworks weapon.

A coworker, unfamilliar with the game engine specifically, put together a rather interesting situation.

Rudimentary tracking system. Allows for convenient if non-realistic operations like automatically facing toward a target then strafing in non-cardinal directions.

A demonstration of the shield UI. It's a little complicated by the fact that the player has two shields in this example.

A larget shield demo. Feedback was somewhat critical; it's slated to be reworked.

Eating a bit of my own dogfood, there's a mode you can toggle where if another ship kills you then you become that ship. 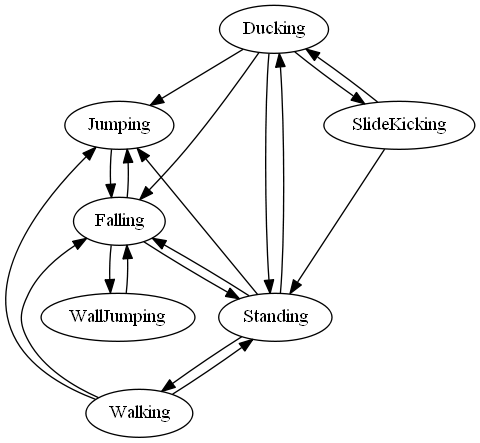 Messing around with a Platformer engine. So far these are the states supported. The full mapping is a little more intimidating.

Workin' on a map for it.